Another grandcalf of Kleenex seen in the Bay of Fundy

The Provincetown Center for Coastal Studies (PCCS) research vessel "Shearwater" found right whales slightly east of Northeast Banks, below Grand Manan on August 22.  The whales were located at the beginning of the shipping lanes and were skim feeding.  This is when the whales feed close to the surface, swimming through zooplankton patches with their mouths open.  The New England Aquarium research team went down to photograph the whales and found three but missed the mother/calf pair which was identified from photographs from the PCCS team as #3123, the 2001 daughter of Drippy-nose, known in the Right Whale Catalogue as Sonnet #1123, daughter of Kleenex.

We found another mother calf pair the same day, #2430 or Minus One.  They were swimming into the Bay with the mother doing a deep dive once she crossed into water over 500' deep.

August 14 we were able to find possibly three mothers and calves, although one may have been a yearling with an unrelated adult.  Sometimes the relationships are temporary and may resemble mother and calf pairs, particularly of yearlings that still retain the calf head shape.

One of the mothers was #2642, Kleenex's (#1142) daughter born in 1996.  She had been tentatively also been seen in late June off Nova Scotia and the New England Aquarium research team had seen the calf but not with #2642 so it was great to put the two together.  Mothers are often off feeding for a couple of hours leaving their calves at the surface where they rest or entertain themselves by playing with seaweed or splashing at the surface (tail lobbing, flipper slapping, breaching).  The two reunite by calling underwater. 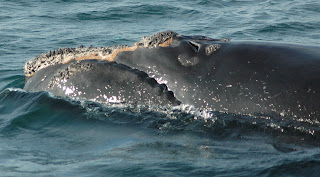 The left side of the 2010 calf of right whale mother #2710.  Documenting both sides of the calf are critical for future identification.
Right whale numbers in the Bay of Fundy remain low, however other species of whales including humpbacks, fins, minkes are abundant.  We have photographed more humpback whales this year than any other year.  We have also been incredibly lucky to have found sperm whales on five different days.  Sperm whales are rarely seen in the Bay of Fundy and there are at least four with possibly more.  They are identifiable by their tail flukes and so far, four different flukes have been documented.
Posted by LDM at 10:35 AM No comments: 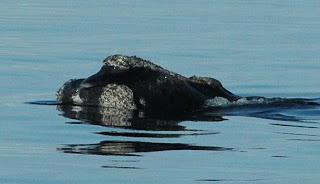 Working with advice on right whales positions from the New England Aquarium research team, we headed out to the Grand Manan Basin in the afternoon on August 11.  We found two mother calf pairs, #3142, the 2001 calf of Kleenex, and #2710, the daughter of Stumpy.  #3142 calf is Kleenex's seventh grand-calf.  Her other daughter who is also a mother this year, #2642 was seen in June off the coast of Nova Scotia with her calf.
Calf of Right Whale #2710

To make the day even more special, we spotted a sperm whale, a rare sighting for the Bay of Fundy, near the location of the right whale mother and calves.
Sperm whale logging or napping at the surface
Posted by LDM at 1:34 AM No comments: 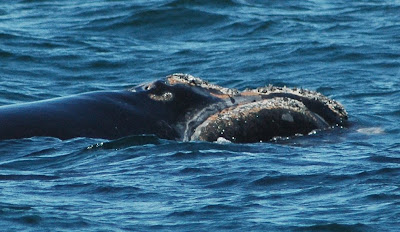