Here is a great blog post about sighting Baldy and her ninth calf in the Great South Channel. She was not seen with this calf in the typical calving area. She joins her grand daughter Boomerang, who also has a calf this year. http://rightwhales.neaq.org/2014/06/baldy-brings-calf-count-to-11.html?m=1.  We are still waiting to see a right whale this summer. Hopefully, the copepod patches will be more abundant in the Bay of Fundy this summer.
Posted by LDM at 10:55 PM No comments:

Couplet and her calf have successfully made it to Cape Cod Bay from the calving area off Florida and Georgia.

Hopefully, we may see them in the Bay of Fundy this summer if the zooplankton resources recover.

Couplet is the daughter of Drippy-Nose and grand daughter of Kleenex.
Posted by LDM at 1:37 PM No comments:

It is nice to see that the daughter (#1301 Half Note) of the first right whale in the right whale catalogue (#1001 Fermata) has a new calf.  Fermata hasn't been seen since 1992 but her daughter has been successfully carrying on the family genes.

This grows Wart's family to twelve grand calves and five great grand calves.  Wart had her seventh calf last year which created quite a stir because she turned up off Cape Cod, foregoing the southern calving area.  Wart and her calf were seen later.

Baldy #1240 has a new great grand calf.  Her grand daughter Boomerang #2503 has been seen with her third calf.  She is the daughter of Trilogy #1503, Baldy's third calf of eight.  Baldy now has ten grand calves and three great grand calves.  Boomerang caused quite the stir in 2006 when she took her calf all the way to Corpus Christi, Texas.  It is unusual for right whales to swim around the southern end of Florida and into the Gulf of Mexico.

The number of right whale calves is now eight for the season.  The Marineland Right Whale Project. a group of volunteers who monitor right whales in the Marineland area of Florida, has a great blog to help you keep up with the latest right whale news in their area of calving.  http://marinelandrightwhale.blogspot.ca/ 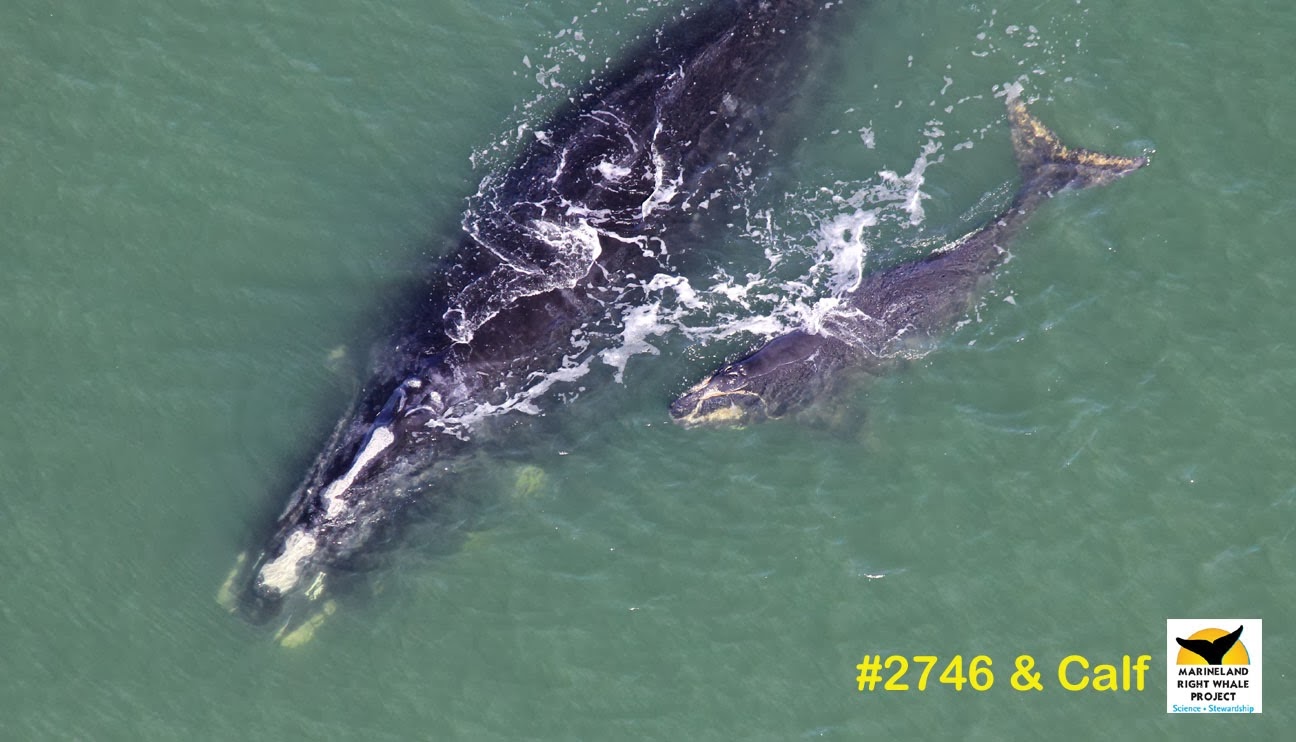 Calving has been slow this winter for right whales.  Unfortunately, this was feared because of the lack of right whales in the Bay of Fundy in 2012.  We had hoped the whales were finding enough food elsewhere, particularly the potential mothers.  Mothers require sufficient blubber to nurse the calf following its birth and will not get pregnant unless this is reached.

So far six calves have been photographed with their mothers and there is still about a month and a half left in the calving season so there might be more and some can be missed on the calving area and not seen until they swim to the Cape Cod area or the Bay of Fundy.

With a much colder and an early start to winter, we are hopeful that perhaps the Bay may return to a more "normal" state and the copepod biomass will return.  We had thought that perhaps 2013 might be better but it was actually worse.

Each winter several groups survey the calving area for right whales and photograph as many as they can.  The Georgia State Wildlife Resource Division has a Flickr site with some of their best photos.  Enjoy!

Naevus, Wart's calf born in 1990, was seen with a new born calf, less than three days old, on December 20 off Sapelo Island, Georgia.  This is the fifth calf of Naevus, the other calves born in 2002, 2005, 2008, 2011.  Her calving interval is very regular and the minimum for right whale females, every three years.  The pregnancy is a year, nursing is a year and there is a year to recover the weight lost during the nursing period which can be an incredible 10 tons.  Shorter calving intervals only occur when a calf is lost shortly after birth and the intensive nursing period does not occur.

This brings Wart's family to seven calves, twelve grand-calves and four great grand-calves, with all generations still reproducing.  Wart had her seventh calf this past season.

Fingers crossed that more calves are to come.
Posted by LDM at 11:41 AM No comments:

Sighting of Catspaw and Calf

While hopes were initially high that a number of right whale mothers and calves would come into the Bay of Fundy this year after twenty calves were born, such was not the case.  Only a handful of right whales were seen and none spend much time in the Bay.  The culprit - most likely a lack of food in the form of copepods, their preferred diet.  It was disappointing for everyone and confusing as to where the right whales might be.

A couple of sightings were reported from Cape Breton, not an expected location.  The  New England Aquarium were able to do a few surveys in the second critical habitat in Canada, Roseway Basin.  The first survey in the third week in August had only a few right whales but numbers grew for the second survey in the middle of September when Catspaw and her calf were photographed (November 19, 2013).  Catspaw is only seen in the Bay of Fundy when she has a calf so we will have to wait until her next calf to see her again, fingers crossed that the copepod biomass returns to a better level.  Fortunately the New England Aquarium reported that the calf had a big fat roll, indicating a healthy baby and mom.

It will be interesting to see how many calves will be born this year after two bad years in the Bay of Fundy with 2013 being the worse.  Because there is a year delay from a poor food availability year, this year and next will let us know if the right whales have found adequate food elsewhere.  Of course, everyone would like to know where that is so the whales can be monitored in this unknown habitat and users of the area can be educated about right whales if they are not familiar with these endangered whales.

There is much discussion after the North Atlantic Right Whale Consortium meeting about the whereabouts of right whales.  Here is a link to an article: http://e360.yale.edu/feature/a_north_atlantic_mystery_case_of_the_missing_whales/2715/
Posted by LDM at 3:36 PM No comments: