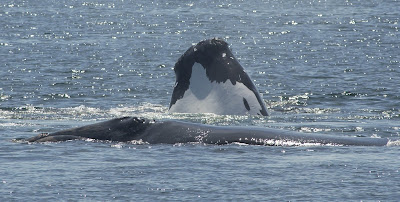 The Bay of Fundy has been very quiet with most of the effects of Hurricane Bill occurring along the Nova Scotia Atlantic coastline. Offshore the wave heights have been more spectacular with 10 to 13 m (30 to 40 foot) seas. These oceanic conditions are ones that right whales and all other marine mammals must deal with as part of their daily lives. It isn't any wonder why they like to nap at the surface on calm days. Heavy seas invoke higher surfacings, often involving breaching or tail lobbing. Timing breathing is important so the waves aren't crashing over the blowhole on the inhale. However, body surfing is not uncommon.
Seabird enthusiasts often head to the shore after hurricanes to see if strays may turn up that were carried by the storm outside their normal range. Similar events can happen with whales but not necessarily because of direct affect but because of strong wind and currents rearranging the zooplankton patches and fish schools. It is not uncommon for whales to spend more time feeding after a storm rather than socializing, replenishing energy spent during stormy conditions or because prey (food) is more spread out.
It will be interesting to see what has happened in the Bay of Fundy after 3 days of dense fog. The New England Aquarium research team is heading out to Roseway Basin for a right whale survey, delaying their departure because of the hurricane. They are hoping to find more mothers and calves because, although the Bay of Fundy should be full of mothers and calves, the number of pairs has been low given the 39 births. Part of their team will remain in the Bay and continue surveying.
Posted by LDM at 1:40 PM