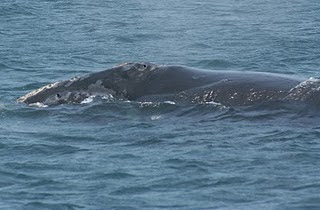 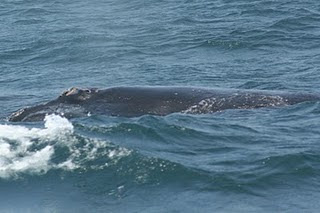 Fog was been a constant in July as it often is with the land warming up quickly and the Gulf of Maine and Bay of Fundy remaining cool. The hot, humid air mass creates dense fog when it moves out over cold water. As a result we haven't been able to survey for right whales in the Grand Manan Basin, concentrating on an area closer to Grand Manan where humpback, fin and minke whales have been found.
However, there have been some sightings of right whales along the Nova Scotia coast from the Brier Island and area whale watch companies. At least two mothers and their calves have been seen with tentative identifications of the mothers as #2642, the daughter of Kleenex and #2605, Smoke, daughter of #1705, Phoenix. Both whales have had one previous calf. The first mother calf pair were seen on June 20 and the second on June 22. The second pair were seen from shore but June Swift. Check out her blog postings at http://brierisland.blogspot.com/ or the blog for Brier Island Whale and Seabird Cruises http://brierislandwhales.blogspot.com/
Posted by LDM at 9:54 AM