We had the Calvineers out today. We didn't find Calvin and her calf but hey were happy with the right whales we saw. The Calvineers are grade 7 and 8 students from the Adams School in Castine, ME. http://www.adamsschool.com/
Bill McWeeney, a teacher at the school, initiated the group to help his students understand about right whales, their lives and the issues they face daily in the ocean. The group is named after the right whale Calvin because of her amazing ability to survive despite being orphaned at eight months of age and being entangled at nine years of age. She carries the scars of that entanglement on her right side and tail but the knowledge imparted by her brief existence with her mother, Delilah, has allowed her to become a successful mother herself, following Delilah's fluke prints along the eastern seaboard.
We found a large group of right whales and a surface active group with the focus being Slash. Her calf was outside the group and I managed to get a photograph of the recent wounds from an entanglement. The New England Aquarium research team had seen these wounds and were interested in more photographs. I was pleased that we were able to locate the calf and I could get a few quick shots. This is the second calf that has been entangled this season. Baldy's calf also bears scars across the face and body when it became entangled but managed to break free. A mother has also been entangled, Mavynne, and successfully disentangled by staff of the Center for Coastal Studies. However, the fate of her calf is unknown.
This is a photograph of the right side of the leading edge of the tail of Slash's calf with the skin scraped off. There are also cuts across the tail stock. Calves often don't lift their tails very high so it was fortunate to see this much of the tail.

Entanglements are all too frequent in these whales and the ugly scars are a testament to their pain and suffering. Ship strikes are also a major issue and I was able to capture an image of Slash's partially amputated tail beside a normal, unscarred right whale tail. A boat propeller cut through Slash's tail leaving this massive scar on the underside of her tail and part of the fluke missing: 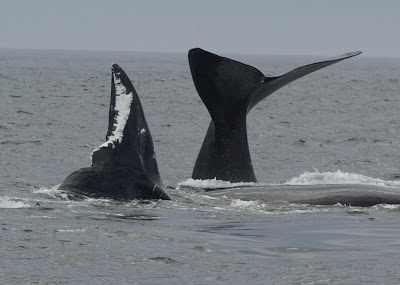