Slash off the Wolves

On August 30 a courtship group of right whales was spotted off the Wolves, an island group between Grand Manan and Blacks Harbour, just off the ferry route. A number of right whales have moved in to that area, including several mothers and calves, because of a 10 m band of zooplankton concentrated between 80 and 90 m. The focal female of this group was a female with a beautiful white belly. White on the bellies and chins of right whales is only present on 30 % of the population. Because she was upside down, it took a while before she rolled over to breathe and the callosity patterns could be seen but just as she was rolling over, Slash’s very characteristic scar on her tail came in view and I could instantly identify her. 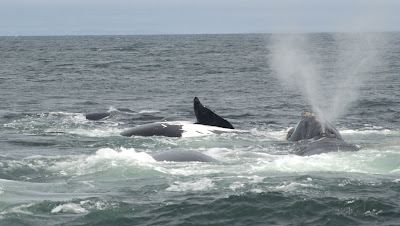 The courtship group lasted for many minutes but broke up as a small calf approached the group. I presumed this was Slash’s calf coming to find its mother. During the summer and fall it is not unusual for mothers and calves to separate for an hour or more while the mother does deep feeding dives. Males listen to the calls between mother and calf and sometimes interrupt with their amorous attentions, even though the mother is still nursing and will be taking at least one resting year before possibly getting pregnant again. This may also be a reason mothers and calves are often by themselves or separate from the main group of right whales but courtship groups are very much a part of right whale social bonding and do occur throughout the year even though the females will not be getting pregnant until the winter.

We didn't see Slash again but the calf stayed in the area for awhile. Slash is often difficult to photograph when she has a calf, doing a good job avoiding cameras. Her calves are not always adequately documented but hopefully this year will be different.
CALF THAT APPROACH SLASH AND THE COURTSHIP GROUP: 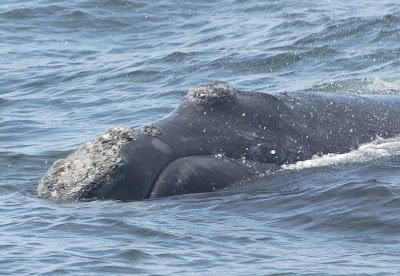