We had an absolutely gorgeous, calm day on the Bay of Fundy. When we finally arrived in an area of right whales, it was so calm that the loudest things were whales breathing, after we reminded our passengers that whales can hear them screaming with excitement. It is interesting that it often isn't appreciated that whales have all the senses we do and can be disturbed by loud noises.
#1503 - born in 1985 to Baldy:

We watched several whales, some socializing, some napping, some feeding until we eventually found a mother and calf pair as we were at the end of our time. Fortunately I was able to photograph both the mother and calf and sent the photographs to the New England Aquarium researcher, Philip Hamilton, who spends many hours a day looking at photographs of right whales and matching them to the catalogue for North Atlantic right whales. He emailed me back very quickly and confirmed that the mother was #1503, Baldy's daughter born in 1985. Philip was pleased that the calf was with Baldy's daughter because they hadn't been able to photograph both together. It is not unusual for mothers to separate from their calves for a few hours while feeding in the summer and if you do not see the mother and calf when they are together, you can be left wondering who belongs to whom.
#1503's calf: 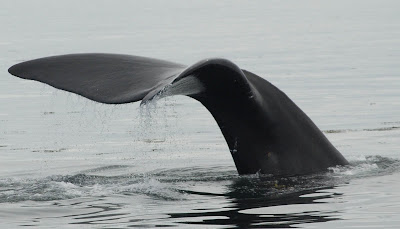