Calvin and her calf

We were fortunate to find Calvin and her new calf September 10th. At first Calvin was by herself, having been feeding and also rubbing in the mud some 180 m below and then she reunited with her calf who also had a bit of mud on its head. 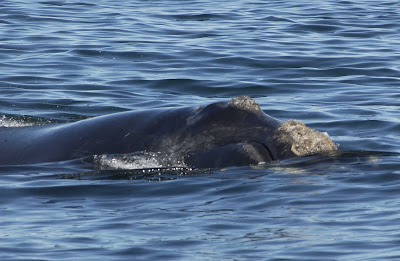 Calvin's scars from when she was entangled in fishing gear stand out. She has a long scrape on her right side that healed with a long white scar. She also has a scar across the front of her upper lip below her bonnet callosity and several white scars on her tail and tail stock. Many scars on right whales heal with white scar tissue rather than the normal dark skin colour. Calvin and her calf about to dive: 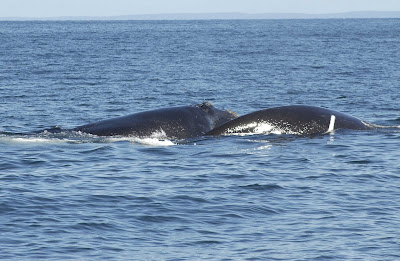 The scar above and the scar on Calvin's upper lip are from being entangled in fishing gear when she was nine: 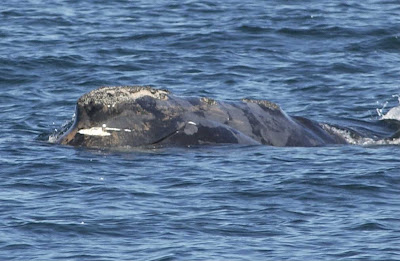 Calvin's side profile and her distinctive callosities. She is moulting skin on her head which gives the patchy appearance. She also had mud on her head from the bottom. 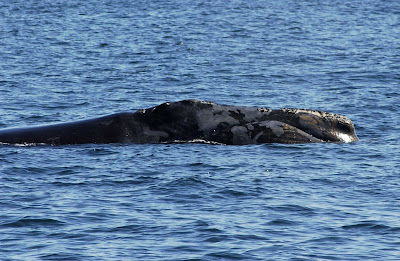 There are various theories about the mud, humpbacks also come up with mud on them at times. It could be that they are feeding on krill very close to the bottom, sometimes within a metre, or that they are rubbing their heads because of the whale lice or may use mud as we do, for a facial or it may be for some other reason. The mud is very thick and sticky and can remain on the whale's head for several surfacings.
The sighting of Calvin was also fortuitous for the New England Aquarium research team who have been trying to obtain a small skin sample from the calf which will be analyzed genetically and may result in the father being identified and also the sex of this calf.
Posted by LDM at 1:39 PM