Another great grand calf for Kleenex

The New England Aquarium saw #2123 and her calf today after the team dried out from heavy rain and wind as a storm moved through the area this morning. #2123 was born in 1991 and this is her fourth calf (2001, 2003, 2006, 2009). She is the daughter of Drippy-nose (AKA Sonnet in the right whale catalogue) and grand daughter of Kleenex. Her first calf died which is why there is only two years between the first calf and the second calf but since then she has been on a regular three year cycle, pregnant for a year, nursing for a year and one resting year.

Philip Hamilton of the New England Aquarium commented that the calf was so large that it looked like a juvenile. The transfer of energy from mother to calf is tremendous with the females loosing a substantial percentage of their body mass while nursing their calves. The resting year is necessary to regain the weight lost.

#2123 is the only grand daughter of Kleenex who is old enough to have calves. Kleenex has only one other daughter who has had a calf but she still has a large family with her eighth calf also born this year.

After I had sent a photograph of a calf that I had taken to Philip, it was determined we had both seen #2123's calf, the calf being alone when we sailed by. This is a head on photograph of the calf's head which can used to track this whale throughout its life: 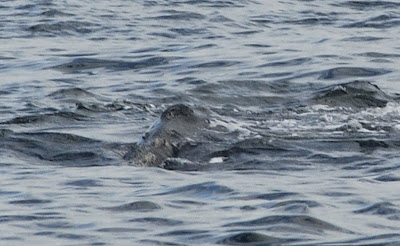 This is a photograph of the calf lying on its side flipper slapping. This behaviour creates a loud bang and may be used by calves and mothers to alert each other of their presence when they are separated, if their calls go unanswered. During the summer, the mother often goes off to feed while the calf remains at the surface. The calf's eye is clearly visible. 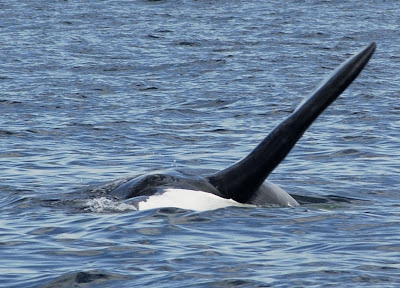